Tim Woolmer, Founder and CTO, thinks his axial-flux motors could be a mobility game-changer 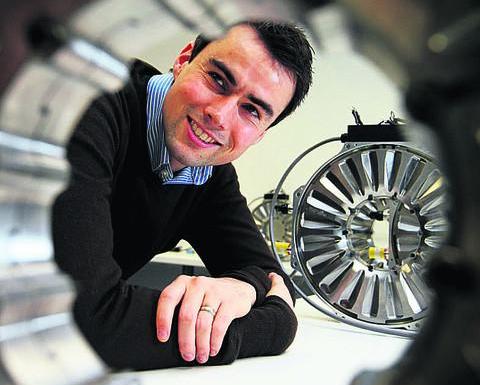 Back in July, YASA (formerly Yokeless And Segmented Armature), a British electric motor startup with a revolutionary ‘axial-flux’ motor, was acquired by Mercedes-Benz. The acquisition didn’t exactly garner enormous press attention, as scant other details were announced. But YASA is likely to be an entity worth watching.

Founded in 2009 after being spun out of Oxford University, YASA will now develop ultra-high-performance electric motors for Mercedes-Benz’s AMG.EA electric-only platform. It will stay in the UK as a fully owned subsidiary, serving both Mercedes-Benz and existing customers like Ferrari. The company will retain its own brand, team, facilities, and location in Oxford.

By contrast, the ‘radial’ electric motor design is more common in today’s EV market. Even Tesla relies on radial electric motors, a legacy technology more than 40 years old with very little left to give in terms of innovation.

But YASA’s axial-flux design, which has very thin segments, means they can be combined into powerful single drive units. This makes them one-third the weight of other electric motors, more efficient, and with 3x higher power densities than Tesla.

Tim Woolmer, YASA’s Founder and CTO, invented this very new approach to electric motor design. I caught up with him to find out what’s next.

TC: What’s the journey so far:

TW: We started just over 12 years ago with really one remit: let’s accelerate electric cars, let’s do anything we can to make electric cars happen faster. We’re now 10 years into a 20-year revolution, every new car that gets sold in 10 years will be electric, no question. There’s nothing more exciting for an engineer than a period of revolution because the speed of innovation is what’s important. What is so exciting for us is we get to innovate fast, and that’s where the partnership with Mercedes is really interesting.

TC: What was different about the engine you came up with?

TW: We started with a blank sheet of paper at the beginning of my PhD. And the idea was to say, what could be created for the electric car industry in 10 or 15 years from now that they would need, that we could meet. Something that was lighter, more efficient, mass-producible in volume. In the 2000s, axial flux motors were not very common, but by combining axial flux technology and making a couple of little tweaks using some new materials, I basically stumbled into this new design which we call YASA: Yokeless And Segmented Armature. It takes what is a light topology in axial flux and makes it even lighter, about half as much again. There’s a benefit because the rotors are rotating at a bigger diameter. So, essentially torque is force times diameter, so for the same force, you get more torque. So if you double your diameter, you get double the torque for the same amount of materials. So that’s the benefit of axial flux.

TC: You’ve done this with deal with Mercedes – what’s next?

TW: We are basically a fully owned subsidiary. We’re going to utilize Mercedes’ industrialization powerhouse. But the key thing is, if you watch how technologies filter down in automotive, they start in the luxury sector, like the Ferraris of this world, and then filter down into mainstream sector and then go into higher volumes after that. That’s a space where Mercedes are world-class in terms of their industrialization, so that’s the kind of the idea behind the partnership.

TC: What else can you do from here?

TW: We will have a very high, high power, low density and lightweight engine so we can explore sport performance coupled with high levels of industrialization. That puts us in a really unique position for all sorts of things.

Although coy about his future plans, Woolmer is certainly one to watch in the EV and electric motor space. Post the acquisition YASA released this video: