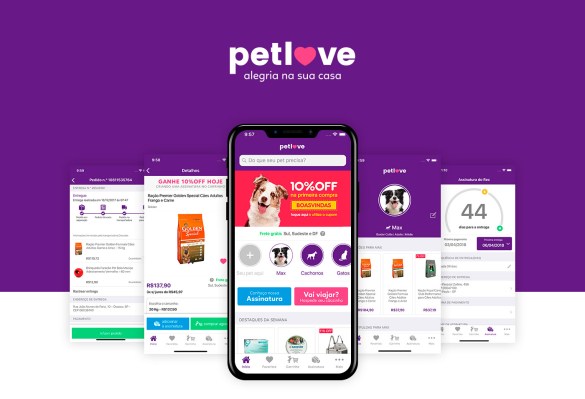 Petlove&Co, a São Paulo-based digital platform for products and services for the pet market, announced today that it has raised about $150 million (R$750 million) in a funding round led by Riverwood Capital.

The round is nearly double that of what Petlove has raised in its history. The company started its life as PetSuperMarket when it was founded in 1999 in the early days of the internet. Today, the company continues to operate an online store offering a wide range of pet products and services.

Tarpon, SoftBank, L Catterton, Porto Seguro and Monashees also participated in the funding round, which brings the company’s total raised to a known $225.8 million over its lifetime, according to Crunchbase. Since January 2020 alone, Petlove has raised over $192 million. The company has declined to reveal at what valuation this last round was raised.

Petlove CEO Talita Lacerda said the company will use the new capital in part to further expand its logistics network with the goal of accelerating its delivery capabilities. In particular, it plans to expand to other geographies its express delivery service, Petlove Já, which allows products to be delivered within four hours of an order being placed. Currently it is only available in a few cities in Brazil, such as São Paulo and Belo Horizonte.

The funding will also go toward growing Petlove’s subscription program, which Lacerda said is the first of its kind in the country, and one of the company’s flagship services.

“The Brazilian pet market is one of the largest in the world and Brazilian consumers are increasingly demanding digitally native products and services with a high level of customer-centricity,” said Francisco Alvarez-Demalde, co-founding partner and managing partner at Riverwood Capital, in a written statement.

The company has evolved and grown after a recent integration with DogHero, the acquisitions of Vetus and VetSmart and the launch of Porto.Pet.

“We have built an increasingly comprehensive and inclusive platform to meet the needs of all stakeholders in this rapidly expanding market,” Lacerda said.

Brazil is the fourth largest pet market in total spend, the company says. According to the Instituto Pet Brasil, total sales of the Brazilian pet market surpassed US$7 billion (R$40 billion) in 2020, growing 13.5% compared to the previous year, while Petlove grew 65%. Overall, pet ownership in the country is high, with 60% of Brazilians owning pets, compared to 50% in the U.S.

Petlove has more than 400 employees, according to PitchBook.

Alex Szapiro, head of Brazil and operating partner of SoftBank Latin America Fund, described the work that Petlove has done to help “form the largest ecosystem in Latin America” as “one of the most extraordinary in the segment and in the entire retail sector.”